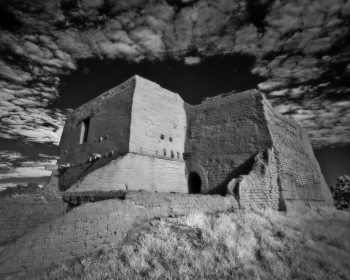 Born in Farmington, New Mexico, Cody Brothers has devoted his life to documenting the western landscape. In November of 2016, Brothers was given a solo exhibit in the Capitol’s Rotunda in Washington DC as part of the National Park Service Centennial. In that same year Brothers was a grant recipient of the prestigious “Imagine Your Parks” project, awarded through the National Endowment for the Arts and the National Parks Service. The grant officially sponsored Brothers work at Death Valley National Park in California, Great Basin National Park and Lake Meade Recreation Area in Nevada; Chaco Culture National Historical Park, Fort Union National Monument and Pecos National Historical Park in New Mexico. Forgotten Horizon is the culmination of a project that has been over two years in the making.

Brothers creates his black and white, infrared film studies in a manner that combines his unique compositional sense with an expertise built from decades of photographic experimentation. His tireless traveling is testament not only to his love for the western landscape but also his devotion to getting the perfect shot. Forgotten Horizon will feature work from his parks project as well as other photographs from Brothers expeditions throughout the west. For Brothers, documenting the parks is not solely about artistic expression but also an obligation to preserve our public lands:

“Our National Parks are not only our “best idea”, they are our greatest asset. They leave each of us with lasting impressions of joy and wonder; instilling a sense of pride and patriotism for who we are and what we can be.”

Forgotten Horizon will be on display beginning May 22ndand continuing through June 19th. Modernist Frontier will hold an opening reception for the public on Friday, May 24thfrom 5 to 8pm at its location at 713 Canyon Road in Santa Fe.